Friends are the future

I’m taking a break from my No Kidding project today, just to blog about the joys of getting together with friends, especially (but not only) those who don’t have children.

We spent the weekend with friends who are also No Kidding, and the freedom of being with others who understand was great. I mentioned another incident at the event I’ve already blogged about when I refused to be rendered invisible. During a conversation about the environment, I shrugged and said something along the lines like, “it’s not such a problem for me, I don’t have children.”

When I recounted this on the weekend, my No Kidding friends were shocked for the same reasons, especially as one has worked in environmental matters, finding the assumption to be insulting. They think and talk about the future all the time, for the planet, for their young staffers, for their nieces and nephews, and – like so many of us - just for everyone. But they/we didn't have to explain this to anyone. It was nice for someone to simply get it.

And because they did get it, we were able to move on really quickly to talk about other issues. (We’d already had several conversations about our respective nieces and nephews, and great-nieces/nephews, feeling like we each know them even though we don’t). Including the rather fabulous seven-course degustation menu we had prepared together. It’s become an annual thing for us, and as we toasted our first course, my friend said, “I hope we do this for years and years until we’re really old and just can’t, any more.” I hope so too.

We are friends because we all enjoy each other’s company, not because we don’t have children. And I think that’s important to remember too. Because next weekend we’re probably linking up with other friends who do have kids, and grand-kids, but we know that won’t be the only focus of their conversation.

It’s all about attitude. Lasting friendships are important for us all, and they need to be nurtured. There’s no need not to be optimistic about our lives just because we don’t have children.

I’ll end with a photo taken in our friends' lovely garden. You’ll see (and will have seen) many more here on this blog, you just won’t know it! 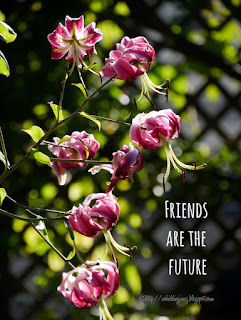