A No Kidding getaway, and an unrelated dilemma

Just a couple of things. First, I missed blogging last week basically because I forgot! But I forgot for very good, No Kidding reasons. My husband and I went away for a few days. We left on Sunday, staying overnight with friends, and so I hadn't even thought about my Monday blog. Then on Monday, we continued driving north for a few days in a lovely foodie region for my birthday. It's not a special birthday, but we decided to get out of the city for a change. Fbk reminded me that we do this, to the same region, about every six years. It seems that we've found the perfect spring destination. I've written about it here on A Separate Life.

We decided to go relatively recently, because we could squeeze in the visit between the end of the October school holidays, and before the long weekend due to a public holiday today, so there were no families travelling, only singles and couples of various ages, making travel very easy. Then our friends over the hill asked us to stay on the way, which was the perfect start to a trip away, and we decided that only late last week. Their kids are adults, and so we could both be relatively spontaneous. We could have convinced them to come with us, except that one of them had to work. It's lovely being able to be "no kidding" with my parent friends whose kids are all grown and doing their own thing.

The second thing is an issue which has me in a bit of a dilemma. The dilemma may not exist if I didn't have children, or at least, not to the same extent. I haven't even been able to discuss it with others, simply because I'm not sure anyone will understand, childless or not. Ironically, I think childfree people would in fact understand. Sigh. I also know one or two who read this blog who might not, so I'm going to be deliberately obscure. It's a dilemma because my husband and I want to set limits around our own lives. And even though we are pretty much in agreement, he is relaxed and comfortable with these limits, and I feel guilty. Even though I know that ultimately, if I don't set the limits, I will get stressed and feel resentful. But, of course, I feel guilty because I imagine (yes, here come the negative thoughts!) that others will judge me for this. Even though I think at least one of them would probably make the same decision. I feel guilty because I (see, it is all me!) imagine others saying that it is because we are childless. That we are selfish. That we'd be different if we had had children. Et cetera. You know the drill.

There's a difference between banishing my own negative thoughts, and still caring about about what others think or say about me. Does that make sense? I want to be considerate. Yet I want to stand my ground too. After all, my life is still full, even if I don't have children. (Or a job! lol) And maybe if we had had children, we would have different limits. But that never happened. And ... I guess I shouldn't feel guilty about that. Progress? Maybe. I knew that writing this down might help. But now I just need to convince my psyche of that. Wish me luck!

Today I noticed a headline on a national news website, even though it was listed under Parenting and then – warning -  featured lots of happy photos of the author with her family. The article is called “Rediscovering joy after baby loss” and was published in recognition of Baby Loss Awareness Week this week. It comprised an excerpt from a new book, “Your Soul is Wintering” by Annie Anderson, telling her own story after losing babies in utero.

The excerpt itself doesn’t go into any details of her losses, though maybe her book does, or her other children (two of whom look young enough to have been born afterwards). Instead, it talks about her grief afterwards, turning to others who had experienced similar losses (as we have all done here), and observing that whilst some people had recovered and were full of joy and gave her hope, others gave the appearance that they would never recover, and implied that there was nothing they could do about it. The excerpt notes the debilitating experience of being told that life being “bearable” was the best she could hope for after such a loss, and when she realised that she wanted to be happy, and her fear that she never would be.

Grief, as we know, can be different for everyone, but I also see so many similarities too, regardless of the type of loss. The author gained great hope from this quote:

‘I am convinced that life is 10 per cent what happens to me and 90 per cent how I react to it. The same is true for you.’ Charles R. Swindoll

Although I might quibble with the exact numbers, I like the idea of the overall quote. Ultimately, how we react influences our future happiness. I touched on this last week here. Attitude, perspective, acceptance, and approach can also influence how we can recover, and long-term, how we might bounce back from setbacks, the occasional ouch moments, or hurtful comments. For me, as I often say, learning to deny those negative questions, learning to show self-compassion, knowing that I am more than my loss or childlessness/No Kidding status allowed me to feel free to embrace my new future, and allows me to continue to do that every day.

Anderson also talks about another key feeling that motivates me too. She wrote,

“I was deeply moved by a strong urge to live a life that honoured our babies, not defined by our suffering but by our love.”

I’ve used very similar words. We can, I think, all relate to this sentiment. Because whether or not we suffered a pregnancy loss, we all suffered the loss of the children we had wanted, the children we already loved so much. Honouring our love for them by living a good life can give us meaning. It honours the difficulty of what we might have been through. It makes us think of love. And it allows us to hope again, and feel true joy. I, and so many others, can attest that it is worth it. 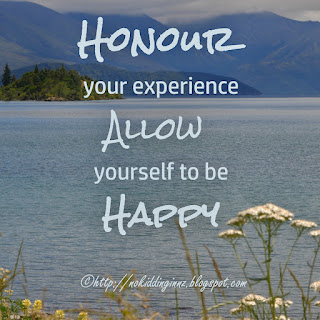 I chatted to someone the other day about my hysterectomy. I hadn’t thought about it for a long time, and it was interesting to look back. In particular, to think about the emotions surrounding it, as well as the physical effects. Before the operation, I remember wondering how it would affect me emotionally. I was lucky in many ways. It was ten years since my infertility journey had ended, and since I had begun living a No Kidding life. Ten years during which I had come to terms with my life, and embraced the wonderful parts of it. Ten years, during which I had become menopausal, and had realised that I did not want to be pregnant any more. As the person I was talking to said, I had wanted to be to have a child five years earlier.

In those first five years when I was no longer trying to conceive, I went through a lot of emotions about my cycle. At first I was bitter, and hated the appearance of my period, especially when it was painful or became heavy (something I was lucky not to have experienced before). After a year or so though, I realised that what I was going through was what every woman went through – whether we wanted children or not, whether we had them or not. I appreciated that. I appreciated being normal. Along with all women my age, I was facing the end of one part of my life, and the beginning of the next.

Unfortunately, society has trained us into thinking that this is when we might feel worthless, unattractive, washed up. Fortunately, in the 4-5 years before I began facing this, I had done a lot of thinking around what was my worth, how society valued women, and whether I bought into that. The answer is, of course, that I had never bought into that. I’d always chafed against the idea that women’s biology created their value to society. I’d been a feminist since I was four! But there’s something about infertility, about the inability to have children, that gets you sucked back into those old traditional, pronatalist views. You start questioning yourself. But then you start answering those questions in the way you always would. At least, that was my experience. I denied the little voices in my head, and denied the voices of society, which were so limiting, and just plain wrong.

Those first five years were the critical time when I had trained and retrained my brain to accept and then embrace my reality – the reality that there would be no miracle* baby and that I would never have children. I’ve talked and written about this a lot, because it was the main thing that helped me heal, even though it was painful at first. This self-training has also helped me gain control over other thoughts since then. I realised only subsequently that it was, effectively, cognitive behaviour therapy. Self-administered.

When it came time for my hysterectomy, I was keen for it to be over, but I was nervous at the same time. I was nervous that some of those thoughts around self-worth, about feeling like a complete woman, might return. But you know what? They didn’t. Or if they did, they were swiftly banished. Sure, my uterus was gone, but – aside from the freedom from bleeding – I didn’t feel any different emotionally. Its absence didn’t make any difference to my life. And as I sit here, I don’t feel any different either. As usual, the anticipation was harder than the actual outcome. And the freedom? Well, the freedom is still fabulous, seven years on!

Note: I wrote a series in 2019 about menopause (including hysterectomy), the physical and emotional issues. You can find all my menopause posts – including ones written leading up to my hysterectomy – here. And posts about banishing those negative thoughts are here. 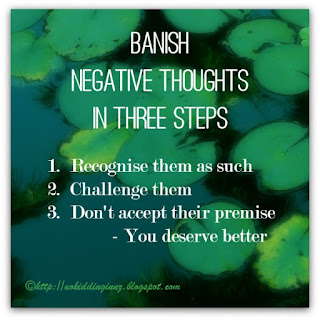 * as much as I hate that term! I feel it judges if you are worthy of a miracle, somehow “blessed” and all those who didn’t get their miracles were left wanting.
Posted by Mali at 16:18 2 comments: