A holiday* should be a time when the everyday issues of life are forgotten, and we can enjoy just “being” and/or “doing” – whether we are lying on a beach, climbing a mountain, or stalking animals with my camera.

And much of my holiday was.  Whereas on a beach or touring holiday we keep to ourselves, this is pretty impossible on a safari.  You eat communally sometimes, and you spend 6-7 hours a day together with a ranger, tracker, and other guests in one vehicle.  We met some lovely people, and – apart from some casual mentions by one couple about their children – we all just enjoyed “being.”  After several days together, we still had little idea what they did for a living, and they also had little idea about us.  It was fantastic.  We were all equals, there because of our love of animals and nature.  We talked and laughed and joked and enjoyed the environment, and each other, without reference to our other, everyday lives, and the roles we played there.  It was a breath of fresh air.

But there were reminders, both positive and negative.  We viewed a lion pride.  Here they are once they got to know us, posing for a family photo. 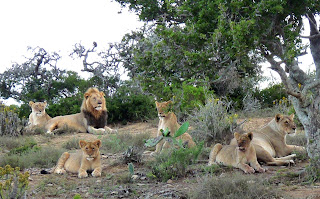 The pride comprised a dominant male, three lionesses, and three cubs.  One of the lionesses was, in the words of the ranger, barren.  She had been pregnant once (they thought), but had never had any cubs.  He had a theory that her infertility was due to the fact she had too much testosterone.  She was a very large lioness.  He was convinced that this supported his theory. 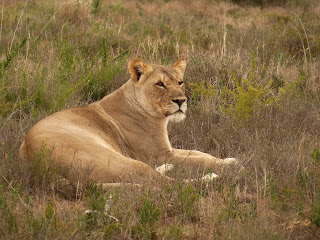 Now, I don’t know anything about the reproductive systems of lions.  This might have been just a theory, or might have been based in fact.  But it made me, by far the largest female in the group and (as far as I knew) the only barren one, feel very uncomfortable. It reminded me of who I was in the real world. And I felt for this beautiful creature.

But that said, it was charming to watch the cubs gather arround their barren aunt, play with her, lie next to her, show tactile affection.  She had a very comfortable place in this family, a place perhaps that some of us (the human barren aunts) don’t always find. 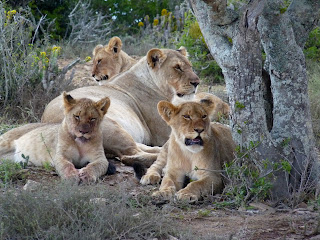 *vacation (for my north American readers)