It's That Day Again: The Pandemic Version


It is Mother's Day on Sunday for pretty much everywhere except the UK. This will be my second Mother's Day when I have neither a mother or mother-in-law. I'm wondering if my husband will think about doing something special for me. I doubt it, as we tend to just ignore the day. (And I'm busy trying to plan a "lockdown birthday" for him next week.) It won't go unnoticed - it never really does unless I'm travelling internationally, and even then I can't avoid the articles or blogposts or social media posts. So far there haven't been many, except some of the more-stupid-than-usual memes that just have me rolling my eyes. The years make it so much easier to feel remote from such a day.

This year, though, I know it might be harder. I think we're all a bit more vulnerable at the moment. I know I am. Most of the time I've been fine and reasonably relaxed, especially since the pandemic here was contained fairly quickly, and is largely controlled, at the moment at least. But I have had the occasional moments when I have felt emotions welling up. Unexpectedly so. Uncertainty does that to us. Loneliness does that too.

When our lockdown first began, I had several days when I had this urge to tell someone about what was going on. I kept thinking of my parents, even though my father has been gone for almost 15 years and my mother for four years, because there was no-one else to talk to about it. My sisters were busy with their families (my older sister formed a "bubble" with her daughter and their family - which strictly speaking wasn't permitted, but in practice probably didn't matter too much) and/or work, and although we chatted, we were far away, and pretty much on the bottom of their priority list. I had one of those rare moments - which has lingered, off and on - that no-one really cared how we were doing. Yes, I know it's not true. Yes, I know how lucky I have been. Yes, it could have been much worse. Yes, I'm lucky I have my husband. Yes, life didn't change too much for me. Yes, the risk outside has never been as great as it has been in Europe, the UK or the US, or other countries around the world. Yes, gratitude has helped a lot. But still. We all have little moments of loneliness that can largely be avoided in "normal life" but in a pandemic, they creep up on us. And I know that Mother's Day might make that all a bit harder too.

So. On Sunday, know that I am thinking of you all. It's just a day - we'll get through it and feel lighter afterwards. If you want to know you're not alone, here's a link to a whole bunch of Mother's Day posts I've written before. You'll see over the years that I have good M Days and bad M Days. But the best thing is that they all pass so quickly!

And check out Gateway Women. They have a replay of a one-hour Mother's Day webinar available here. And they're also doing three live "Other's Day Happy Hour Chats" on Sunday at different times to suit different times zones, where you can connect with the Gateway No Kidding community. Check out details to suit your time zone on that same link.

Update: With apologies to those I am sure to have missed, here are some other Mother's Day posts from No Kidding bloggers:

Silent Sorority's "Mother is Also a Verb."
Elaine's Muttertagsblumen (Google will translate it really well if you need that - I do!)
Sue's "Hide. It's Almost Mother's Day" post with helpful hints. 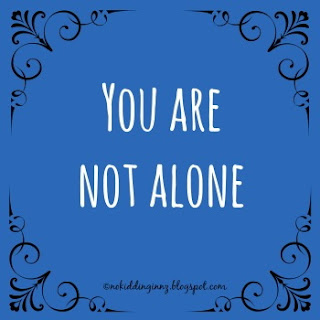