One of the habits I adopted almost immediately after finding that my journey to have children was over was that of correcting myself. When I saw the folic acid in the cupboard, I remember thinking "I should keep that just in case I get pregnant," followed by the immediate rebuttal, "but that's not going to happen, is it?"  Corrections like that were, initially, painful, but they also helped me learn not to live in the "what-ifs" and to surrender to the reality.

I have, in general, broadened this to questioning myself, because those insidious little voices that tell us we were didn't deserve to have children, that it was our fault, that we are lesser were not only destructive, didn't go away so easily. And they came from somewhere inside me, as well as from others.


I learned to ask myself, "is that true?" I learned to question my assumptions - "did I really not deserve to have children? If so, how does anyone deserve to have them? What about the good people I know who don't have children, and the terrible people who have them easily?" I challenged those negative thoughts, and asked myself constantly about my assumptions. I came to learn what I thought was true, and what wasn't. I can tell you that this made my life so much better, in all aspects of my life. I felt I knew myself properly, for perhaps the first time in my life. I felt more content, more confident, more at peace.

It made it easier to question myself about my assumptions other people's behaviour too. To wonder what motivated them to say things that sounded insensitive or unkind or sometimes cruel. I realised I was able to understand people a little more as a result, and - better still - to forgive them when it was easier to see things from their perspective.

That then made it easier to question other people's assumptions too. To challenge them - gently, by asking them about these assumptions, about why they thought this way - and to put another side, my side, that they may have never considered before.

Enquiry, asking, questioning, wondering. I spend a lot of my time doing it. It helps. It has helped in the last months too, even though I have frequently been critical (in my head or to my husband) of the behaviour of others, when I step back and ask, "what makes them behave like that?" I can see that sometimes they are motivated by fear, by poverty, by loneliness. I can understand and forgive that. I don't have to agree. And I don't have to be silent. But it makes me kinder, and a bit calmer, and I like that. 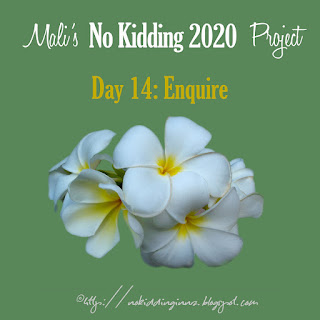