Several blog posts over the last few weeks have all come together in my mind, as well as observations of a Fbk group focused on ageing without children. And so I had to put some thoughts down.

I read a post of a woman who was struggling with the fact that it was unlikely that she will have the third child she so desperately wants. I read Fbk posts from people who seem to reside permanently in grief over the children they were not able to have. They seem unable to be able to move on, and I feel for them. I read their comments wishing that they could join this community, and feel the hope and compassion and understanding that I try to offer, and that is offered by my readers and fellow bloggers. And I read Léa’s post here about the difficulty of acceptance, referring to a study (one that I had quoted after Loribeth had referenced it about five years ago) that found that acceptance is vital for happiness.

Then I read responses to the people who were stuck in their grief from a person who berated them for that. Just because this person was able to move forward and embrace their life, and embrace the children of friends and family, they seemed to think that everyone should be able to do that. And they weren’t particularly kind. They didn’t think that maybe their circumstances were different, maybe their friends and family were more inclusive, maybe they had children in their lives they could influence, or maybe they had the mental and physical wellbeing to be able to cope with their lives. So they were judgemental of the grief-stricken for not moving on. Which is, as we know, exceedingly unhelpful.

“Get over it,” or words to that effect, are never going to work. I am cautious even when I tell people that it gets easier, because I know many will resist and resent that message until, one day, they realise they can start to believe it. Over 15 years, I’ve seen this pattern over and over again. Over one, two or three years, the large majority of us learn to accept our lives. We first learn to let go of the yearning. Then eventually, the mourning turns into remembering. And we learn not only to accept our lives, but to love them. We learn to look to the future.

But what of those who don’t? Decades on, they are still grieving, or worse, still yearning. I don’t know if they are stuck in their grief simply because they have never received help and encouragement to find a way to stop their yearning that will never be fulfilled. Or maybe they’ve never had to face and overcome their emotions, their fears, and now don’t know how to even start to do that. Or maybe, perhaps, they were just having a bad day (as we all do), and needed some understanding and compassion.

It’s frustrating. I started this post to write about those who have been unable to move on, and who continue to feel their loss keenly. I end it with no helpful conclusion, other than that compassion and understanding and acceptance – our own, as well as that of others – is key to our well-being. As Léa said so beautifully (in translation), "it is essential for (our) mental health to mourn without continuing to hope in vain." 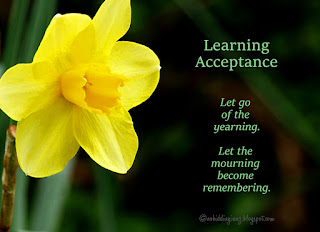