I had always had an online outlet through the ectopic pregnancy site I joined, first as a member, and then later, anonymously, as a moderator and advisor on member forums. Only one or two of the dear friends I met on that site resolved without children, and so when I looked for another outlet, No Kidding in NZ was born. That led to other, much scarier, opportunities to speak in areas outside this community, using my own name rather than my pseudonym Mali. I could do this because I healded. I felt sufficiently removed from the grief that had gripped me in the early years to be able to speak about my situation, and to challenge the stereotypes and assumptions of others. It took a long time to find my voice, to overcome the negative voices of society that I had absorbed over a lifetime, and that had influenced my own negative voices. It took a real effort, and if I say so myself, a degree of courage confidence to use my voice.

Others find their voice much earlier. Some never feel the need, or just don't want to "go public." All that is fine. I remember a friend from the ectopic site saying that she would tell people at the bus-stop about ectopics if she had the opportunity, simply to raise awareness. I loved her for that. But I’m still not as open about the impact of not having children as she was. I’d like to be. But I also find that – for me – there’s a balance to be navigated. I don’t want to drive people away, or risk antagonising them, making them close their ears to my messages. After all, even those who try to be understanding will hear my truth through their own filters. And that’s never easy to dismantle. So I try to choose my moments. I speak here, and I speak up from time to time around family and friends and acquaintainces who sometimes resort to false stereotypes or assumptions, and I speak more publicly when I can. Most importantly, I speak these truths first to myself. Maybe that's all some of us might need. I know I need to speak up more than that. As I've said before, I refuse to feel invisible, or diminished.

In finding my voice, and using it (but only when I choose), I find an authenticity that I might otherwise have lacked. Speaking our truths not only helps us raise awareness, and hopefully increase understanding of situations that are different to that of the majority, but also allows us to recognise and accept and show compassion to every part of ourselves. Feeling whole is wonderful, when infertility seems designed to make us feel that we are not whole. And there’s a peace and degree of contentment in that. I hope you will find this, or perhaps you have found it already. If so, I'm glad. 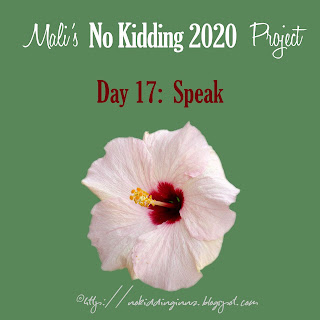