Societal change and the Childless

For the last five months, I’ve been writing mostly on my No Kidding 2020 Project, running through the emotions and actions of healing. I’ve enjoyed it, but rather got out of the habit of writing. There are a lot of topics for which I have half-written posts sitting in my files drafts, but my mind isn’t quite there yet.

I thought I’d comment briefly on Loribeth’s post last Monday about the cultural shaming of childlessness, and wondering if we would gradually see greater societal acceptance over the next 20-40 years in the way acceptance of the LGBTQ community has normalised. Go read her post here – as you can see, it got me thinking.

I like to think that in the future the No Kidding community will feel as accepted and unexceptional in society as those who are parents. But I see several possible scenarios, varying from the pessimistic to the more hopeful:

I realise I’ve come across as quite pessimistic. I'm not sure if that's representative of my views, or the fact it is Monday, and it's cold and rainy here!

What do you think? 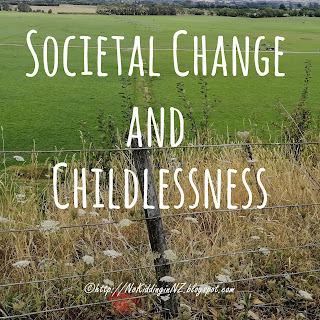 * PS. It’s worth reading Lori LavenderLuz’s post and links on international adoption and the assumptions around it here, and Jess's post on the same topic here.