Last week, Sue at Childless by Marriage, wrote a post asking if her readers needed to read her blog in secret. It took me back to my very first forays into the internet world looking at pregnancy loss and ectopic loss. I was lucky. I found a home at the Ectopic Pregnancy Trust messageboards relatively quickly. Well, let's say I found the site quickly. I lurked through my first ectopic, but read it avidly and got to know some people who are still friends almost 20 years later. Then about six months later, I started reading and posting on their Trying to Conceive boards. I learned all about cycle monitoring, ovulation tracking etc. It took me a long time to confess (because that's what it felt like) to my husband that I was doing this.

By the time I had my second ectopic a year later, he knew that I was well into this online community, but he never had any urge (as far as I know) to see what I was reading or saying. He knew it helped me, and that was enough for him.

So I remember the feeling of wanting to hide what I was reading and what my thoughts were. Perhaps it was because I was trying to figure out what it was I was thinking and feeling before I discussed it with him, or anyone? Perhaps it was shame? Perhaps it was nervousness that he (or others) wouldn't understand, or would mock it? It took longer for me to open up about that to friends or family. A lot longer. Even now, I don't tell many people about this blog unless it is relevant to our conversation.

Of course, I know full well that anyone could search my real name and they'd find this blog. I bumped into a woman I worked with 34 years ago at the supermarket doing pre-Easter shopping. We had a lovely long chat and catch-up, and she noted that she had read something I'd written (directed to it by an article in a women's magazine where I had been quoted) and had liked it. I will admit, I write here as if I am still anonymous! The head-in-the-sand attitude helped when I first "came out" publicly. I was worried about people being mean, judgemental, mocking. But now, I just shrug. I am confident in what I write and who I am. But it has taken time.

And I can understand that anyone first dipping their toes into the No Kidding/childless world of writing here or elsewhere around the internet might want to stay anonymous, or lurk for a while, or always use a pseudonym. Because it takes us time to discover what we think, where we belong, and who we are. It takes time to figure that out and feel free to mention it to even those who are closest, let alone in more casual relationships or with more distant acquaintances. Protecting yourself, your privacy, and feeling safe as you're going through some major life adjustments is not wrong, and it's not shameful. It can give you the freedom to be who you are, as you figure that out. And that's pretty wonderful.

Time makes it a lot easier. Then one day, you'll find that privacy doesn't matter quite so much any more. You might feel your shoulders relax, hold your head higher, and puff out your chest, proud of who you are, and how far you've come. 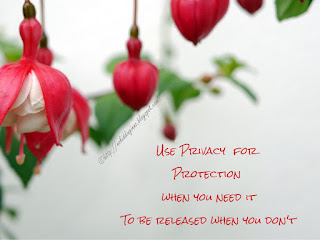