Marking milestones can help us heal

As you know, many of my posts are prompted by references or comments made on other bloggers’ posts. Loribeth, in her post here, has prompted today’s musings (and given food for thought for another post another time as well), and I’m always thankful for her regular posts which flag articles or commentary that I might not otherwise have found.

She mentioned an article about milestones, and although it largely focused on how the pandemic has meant we can’t recognise many milestones, and talked about a lot of parent-related milestones too, it got me thinking. I’ve written about No Kidding milestones before, but I don’t think I’ve ever recognised the milestone of ending our fertility efforts. It just happened. Partly because it was so painful, I was certainly not going to discuss it with anyone (other than online, and one friend IRL) in person, or have any sort of public recognition of that. Have you marked this milestone in any ritualistic way?

Actually, though, as I write this, I’ve realised that maybe I did do this, just not deliberately, or even consciously? As I mentioned almost ten years ago here, only a month or so after our infertility journey ended, I took the opportunity to send to nieces and nephews (those who were still young) Christmas stockings I’d bought way back in the 1990s in Bangkok, and in my notes to their parents, advised that it was clear that we were not now going to have the opportunity to use them, but that we wanted their children to have something that was originally intended for ours. It wasn’t a public or in person discussion, but it was important. It was my way of marking the change in my circumstances, drawing a line, and doing something meaningful for others. I just didn’t realise that at the time. It was important, because it meant I was no longer hanging on to hope for that particular outcome. It was indeed a milestone. As I noted in my earlier post, I felt lighter after I had done it. It allowed me to begin to look forward.

Appropriately, further on in that article, I found this quote, from Juliane Maxwald:

“The process of change involves both grieving loss and embracing growth.”

This is so absolutely true for those of us who have to give up our quests (voluntarily or involuntarily, or even never get the chance to get started) to become parents. We need to grieve our losses. But it isn’t just that we have to grieve what we can’t have. The process doesn’t stop there, even though some do get stuck there in this stage. I have certainly observed people much older than I am who have let the grief stay and surround them, affect their relationships, and become a major part of their identity.

But we can grieve loss AND embrace growth, mourn something that is gone at the same time hoping for something new, and in doing this, we can begin to look forward. Embracing the future does not negate the losses we feel or have felt, even though I know that is the fear (and gut reaction) of the newly bereaved. Embracing the future does not mean that we are betraying the person we were who felt that pain so acutely, or that we are denying the desires we felt. It does however make our losses more bearable, more understandable, and allows us to heal. Ultimately, we can embrace our lives, we can recognise our losses without perpetuating the pain, and we can heal from those losses, without forgetting how we got where we are today. 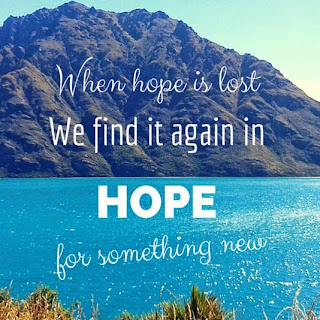