Last weekend, the 2022 Childless Collective Summit was held. I looked at the topics, and there was only one talk that I really wanted to see. One out of forty! A lot of it focused on infertility, grief, and learning to cope with and embrace your childless life. As that's what I've been writing about for over a decade here, and reading about for longer, I didn't feel the need to watch all the talks, though I am very glad that they were there for others who need them. I don't know if they're still available - though I think you can still sign up for the longer term membership that gives you access to all of the discussions.

The talk I did want to see was - surprise surprise! - Jody Day's discussion about Embracing Childless Elderhood. As any of my readers know, it is a subject I have paid some attention to over the years. In case you can't access it online, I will pull out a few of the key issues (for me) from the talk.

Jody is increasingly focus on ageing without children, and the issues around it, as she (like me) approaches the birthday with a zero with a big six in the front! I of course was hooked when she started talking about language, and in particular the language around older women, noting that the only positive word for such women is grandmother. All other words have negative connotations - I referenced just last week my dislike of the word crone. Hence her use of "elderwomen," which I am coming to like.

She talked about the wisdom that starts coming with age. Though sometimes I wonder if it is solely with age, and if perhaps the wisdom we notice is because we have been through traumatic events or experiences, and having to readjust to the idea of a life that was not the one we expected encourages us to think more deeply, to reflect on our lives past and future, and to rethink our priorities. That wisdom, if I may be so bold, is invaluable, and sometimes puts us ahead of others who haven't been through these things. And she mentioned the fact that without children, we don't have any obvious recipients for sharing that wisdom. And that might be another loss. I think that's why I blog. I can put it all out here, and hope that someone gets something from it. As I've said many times before, I do not think we have to have children to leave a legacy, but do it in many other ways.

Jody talked about the five myths she has identified about growing older without children. I didn't manage to take note of them all, though I doubt that any of my readers will be surprised by any of them. Issues like legacy (which I have covered several times here), like support networks, like loneliness, or the "Golden Girls" myth, which made me laugh, because I have single, parent friends who talk about doing this with their other single parent friends. (My husband and I were not included, even though I jokingly suggested he could be our "handyman" if we joined their group. Sigh.) In relation to this, Jody asked, "what happens if your friend gets dementia?" This is an excellent point, but one which most people don't think about. It reminded me of talking with a woman whose friends had built "their last house" in a nearby country town. "Does it have steps or stairs?" I asked. "Because if not, it's probably not their last house." She had never even thought about this.

Much of the discussion talked about support networks and socialising with other generations. I found this part of it quite depressing. I know I've talked about support networks before, and I know I need to extend my friend/acquaintance network. But I found myself a bit depressed by this discussion, for two reasons. The first was the reminder that society largely relies on the unpaid labour of women in caring for the elderly. My elder sister and I did most things for my mother, as her dementia deteriorated. Even though the state provided daily "check" visits, some cleaning, and weekly supermarket shopping trips, once my mother was no longer able to drive. It was similar with my father-in-law. We saw both the wonderful value of this help, but also the shortfalls of it. Still, dealing with the "system" on top of their physical and mental needs was where we were best able to help. Knowing there will be no-one who can do that for us has motivated us to think about ways around this. I've covered some of that here.

The second reason I was depressed was the pressure it put on me to have a multi-generational support network. I am lucky. I have two nieces still in this country, and one great-nephew. But that's it. I'm not naturally easy with younger generations, though I can make good connections when I have the opportunity. But I don't have activities that expose me to them, and I can't quite imagine what I could do that would do that. Building contacts amongst the younger generations is easier said than done. Parents are busy, sometimes possessive, and don't always invite others to be part of their circle, to get to know their kids. I've talked of this elsewhere too, noting that it would help both parents and the No Kidding if this happened more. So I felt as if I was being blamed for my lack of contacts. In general, I'm pretty good at making myself do things I'm not comfortable with. I'm shy, but I have forced myself to meet strangers, make cold calls, walk into rooms where I know nobody, etc. But I'm tired of that, and don't t want to have to force myself out into the world, doing things I don't want to do, with people I don't want to do it with, just to expand my social network. It sounds too much like my old work days! <much stamping of feet> Now, I feel a bit better this morning when I think about it. I know it is necessary. I've certainly acknowledged that in part, and I'm glad Jody raised it. But I know too that it is so much harder for some people than it is for others. And that's hard, when we know our parent friends probably don't have to do it quite as much as we do, and that society doesn't really care, or make any provisions for this to happen.

My final point is that I felt the different stages of ageing were largely ignored. (I touched on this in my post Ageing without Children: The Plan.) Now, that's probably because Jody only had a limited time in which to make her many, excellent points! Ageing on its own is a huge subject, let alone dealing with being childless at the same time. But when we talk about older women being wise, having a lot of skills to impart, being active and activist, we're really talking about what I think of as early "old age." It's the vibrant, exciting, free time when most of us are still relatively healthy, active, and alert, and have so much to offer the community, the world. That part of ageing doesn't worry me, but it is the stage of ageing that gets a lot of advocacy, primarily because the people doing the advocacy are that age. I'm enthusiastic about it, and ready to get started (once that birthday is over of course). It is the end stage of old old age that is really most concerning, when health goes, dementia may set in, etc. And the answers of how to deal with that are still few and far between. I think that is what Jody is going to be working on. I hope so, and I'm keen to contribute to her work on it, if she'll have me. Regardless, it is what I will continue to think about and talk about here too, as we all get older, as we enter the planning stages for that stage of our lives.

Finally, Jody recommended a number of books about ageing that I am keen to read. I'll review them here if/when I do. 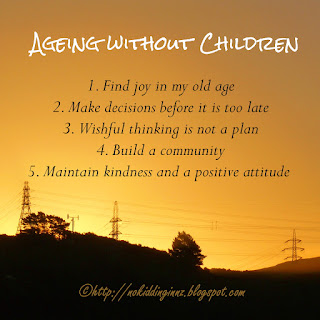 And I leave you with these five points from my post that summarised a series on Ageing without Children back in 2020.