It wasn't meant to be

It is World Childless Week. Learn more about it and see all the other submissions on this topic here.

When I went through infertility, losses and childlessness, I learned that what comforts one person can feel like a dagger to the heart of another. Some people speak openly, others wish to be private, some want condolences and consideration, others don’t want to be treated any differently. We’re all individuals. There is no one answer, no one way to treat someone who is grieving or sad.

Unfortunately, others haven’t learned that lesson. Platitudes and cliches take pride of place in many people’s vocabulary. I live in New Zealand, where religion is usually something private, it is rarely in the public eye, and most people are not religious, or adhere only in a cultural sense,. I am not religious, neither are my friends or family.

I learned to discount judgemental comments when I was a Girl Guide (around 11 years old), when the leader asked me if I went to church. When I said I didn’t, she called me a wicked girl. I was not, I knew that. My family were good, kind members of the community. Putting others first was one of our primary rules. And at my school, the “Golden Rule” (“treat others as you would have them treat you”) was the first thing on the classroom blackboard at the beginning of the year, and stayed there for the five years I was there. My friends and their families did generally not go to church either, and they were good and kind too. I never doubted this.

It is not surprising, therefore, that I rarely encounter religious statements. (Except perhaps in the comments section of the Huffington Post, where an article I wrote about childlessness once ran. Beware the comments section, as they say!) This means that I’ve never had someone casually say to me, “it is all in god’s plan.” However, I have heard people say, “it wasn’t meant to be.” If you ask me, that’s just secular for “it’s all in god’s plan.” And neither statement is comforting. In fact, both are quite insulting if you think about it. Both statements imply that someone or something decided that I wasn’t meant to be a mother, and that the speaker agrees with that basic premise. The further implication being that this means that there has been some judgement about my suitability to be a mother.

These implications are patently illogical and false. Implying that I was never meant to be a mother must also mean that all of those who have ever been mothers were, in fact, meant to be mothers. That includes the neglectful, the cruel, the stupid, the unkind, the ill, the humorless, the dull, the controlling, and the abusive. I don’t accept that. Anyone who implies that their motherhood was somehow “meant” and therefore better, but mine wasn’t, is deliberately insulting me. It makes me feel judged by them, lose trust in them, move away from them.

Personally, I dismissed those ideas many years ago. I don’t accept them, and don’t believe them. They were the unwelcome answer to a question that I wasn’t asking, the question, “why?” Gertrude Stein said it best when she said (I’m paraphrasing) “There is no answer. There never was an answer. That is the answer.” I’m very comfortable with that, and I find it comforting, even liberating.

But it also makes me question why they people might say this. “It wasn’t meant to be.” Do they honestly think it will help me, or the recipient of these comments, to hear this? Telling someone their misfortune is all in God’s plan or that it was never meant to be is really telling them that you don’t want to hear their concerns. It dismisses their loss, their grief, their unhappiness, and the enormous efforts they may have made to try to become parents, or the future efforts they may have to make (or have already made) to claw themselves back to normality, to reach an acceptance of the life they hadn’t planned.

I think too often that these statements are made because they are easy, and they are final. It tells the recipient that you must just accept it, and there’s not too much to be said after that! It doesn’t begin a conversation, rather it ends one. But at least the speaker’s discomfort is abated. They’ve tried to appease the recipient, and they feel good about that. If the recipient isn’t talking about their situation, then the problem must no longer exist, right? And that absolves them of the need to explore the issue further.

What’s more, these statements impose their world view on the recipient, when they have not lived the life of the recipient. They’re not thinking about the person on the other end of these comments, on how they have made them feel. It’s all about the speaker, when it shouldn’t be. And it says so much more about them than it does about us.

I think that’s the problem. I wish people who spout these platitudes – religious or not – would consider that. 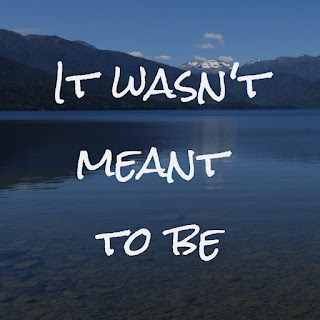