Okay, World Childless Week is coming up - 10-18 September - and I'm completely unprepared for it, and unfortunately, I'm unlikely to be able to do much for it given other commitments.

However, one thing that people are doing is to post an image on social media, either of themselves, or something that represents them. How cool would it be for the No Kidding amongst us to be visible for at least one week in the year?

The hashtag for this is #IAMME, as well as #Worldchildlessweek. The the ones I have seen so far also include a list of things we are, as well as the thing (No Kids. childless) we are not. It's hard narrowing it down, given that I once wrote a post of 100 things that emphasise who I am, rather than the things I am not. You don't have to show your face, and you can just write on a card or paper who you are. 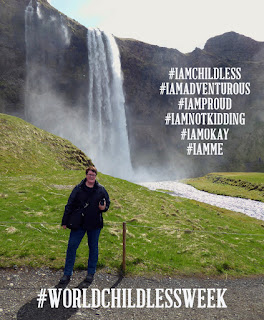 Email ThisBlogThis!Share to TwitterShare to FacebookShare to Pinterest
Labels: #Microblog Mondays, #worldchildlessweek, knowing myself, lucky, no kidding, not kidding, strength