Once again, I’m thinking about the issues of ageing without children, almost certainly because my 91-year-old father-in-law is in hospital. In the last year we’ve had to spend a lot of time helping him out. But we’ve been incredibly lucky to have a lot of assistance in the form of free in-home visitation care provided by our public health system. At first he was getting one visit a day, then for almost a full year he had two regular visits every day (morning and afternoon), and in recent weeks, three visits a day, plus a cleaning service every two weeks.

But it had become clear that he couldn’t cope at home on his own, even with the extensive help my husband has provided him, and so we set about trying to get him into a care home. But of course, life laughed at those plans, and he’s in now hospital, with a sudden cognitive decline, so the place we had arranged for him may not now be the right place. His wish, of course, was that he wanted to die at his home, the house that he built, where he raised his four sons, and has spent his 30 years of retirement. We warned him that it was unlikely to happen, but as usual, it never seemed to register until it became too late. In reality, it just doesn’t work out that way for the majority of people, but few will acknowledge that in advance. I know it’s what we would all like. But dying at home is a wish, not a plan!

But as we know, plans don’t always work out either. Sigh. Once again, it reminds me that we will not have someone to advocate for us in the same way, so I’m thinking about doing some more writing along this topic. Consider this a teaser, and watch this space. 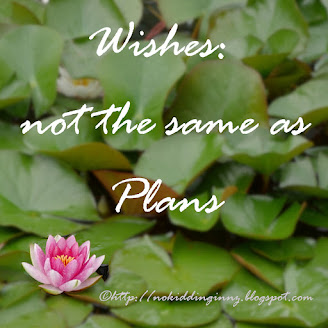