Some time ago I read six words that I thought were terribly sad. The words were:

“I still wish I had children.”

I found them terribly sad not for the obvious reason. Yes, it is undeniably sad that they wanted children, and were not able to have them for whatever reason. I have enormous compassion for them because of this. I share in that experience. But that’s not the reason why I felt sad for the blogger. I felt sad because, years later, they have been unable to let go.

Sure, I’ve probably thought those words in the past. And yes, there are times when I feel the sadness of not having children, which is maybe what the person meant. That they wish their lives had been different. That they meant to say, “I wish I had had children.” This could all be my misunderstanding of a simple statement. Because I think we all understand that sentiment. I certainly do. Accepting what has happened, and moving into the future, doesn’t mean that we didn’t want something different, or that we occasionally wish it had been otherwise.

But I thought it was worth writing about, because what if this blogger actually does sit in their home, in the present day, years later, wishing they had children? I know there are people who feel this ways. I had an online (and then in real life) friend who would talk about bursting into tears in her 60s because she had seen children or pregnant women at the doctor’s office. She had moved on, but only to an extent.

And if that is the way this person feels, then I feel enormous compassion for them. Personally, I cannot imagine saying the words, “I still wish I had children” any more. I haven’t really felt that for years. The sentiment seems pointless to me. I never had children when I was younger. I’m never going to have them now. It would be a fantasy to wish I had something that is impossible. Why would I do that? There are enough instances in the average day or week that remind me I don’t have children, and remind me what my life could have looked like if I had had them. I don’t need to fantasise. Yet obviously, some people still do it.

Of course, it may work for them. We all cope differently. They may have a moment or a minute or an hour wishing they had children, have a bit of a cry, and then move on with their life. Of course, if they feel better after that, then they have found a way to mourn and to live. It may work for them, but it wouldn’t work for me. If I did that, I would be only focusing on what was bad about my life without children, and I would be thinking about only the good things about having children. It would be negative thinking, not accurate thinking. It would be living in a fantasy world, rather than acknowledging the good things in my life today. Some of those good things are a result of not having children. But worst of all, if I felt that way and allowed myself to regularly feel that way, it would be extremely emotionally difficult, and incredibly unkind to myself. I can’t imagine letting myself feel that way, and then wrenching myself away from the fantasy back to real life. A form of self-torture!

Teaching myself NOT to wish that things were different was a major step in healing. It was the beginnings of acceptance, and was, in reality, the first step of that process. I remember opening a cupboard where I used to keep the folic acid. There were still some tablets left, and I thought, “maybe, just in case, I should keep them.” Then my logical brain kicked in. “That’s not going to happen,” I realised. I remember repeating it to myself to make sure I fully registered the meaning. It hurt. That first time it really hurt. But I picked up the folic acid bottle, and threw it away. And the next time a thought like that slipped through, it was a tiny bit easier. It is the same as denying those negative thoughts I’ve written about before. I learned to address them and then dismiss them, and I am so pleased I did.

As I wrote a few weeks ago, indulging in wishful thinking when all doors were now closed to me would be inaccurate thinking at best. At worst, it would be self-punishment and denial. I have not been perfect at learning not to do it. But gradually I was able to recognise it for what it was, and to turn away from it. This helped me enormously. It was an act of self-compassion. And it became habit. And it allowed me to look forward, to breathe, and to live in the present and think about my future, rather than staying in the past. 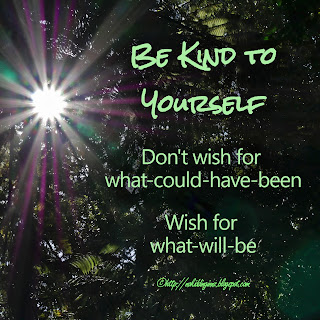 Email ThisBlogThis!Share to TwitterShare to FacebookShare to Pinterest
Labels: #Microblog Mondays, balance, healing, moving forwards, negative thoughts, self-compassion, what could have been