Further to my post last week, this week I want to talk about the perspective of parents, both in asking this question, and their reactions to it.

From the perspective of the majority, the people who have children, the question* “do you have children?” seems perfectly reasonable. For them, it is an easy topic of conversation, an easy way for them to find things in common to talk about, with lots of follow-up questions (how old, what schools, etc). It breaks the ice, and allows people to bond quickly when they don’t know anything about each other. “What’s wrong with that?” they think, not allowing themselves to answer their own question. So I'll answer it for them.

When we do have a conversation with strangers, rather than ask the question bluntly, some throw in a casual comment or comments about their children that are often a seemingly natural part of conversation. This is perfectly natural – we talk about what we know. But it also might be that these comments are in fact a fishing expedition, a call-and-response process. Those making them might mention something as an aside, but they are also often testing the waters to see if there is a response that tells them whether they can continue to this line of discussion. It tells them whether they can delve further into the world of parenting and kids or not. I’m actually fine with this approach. It allows parents to choose whether or not they want to volunteer information about their children. And it is a much more subtle way of asking “the question,” and one which doesn’t require a direct response. It is more sensitive, and less intrusive, and allows me to show interest in their lives, without throwing myself into a whole “I have kids too” type of conversation.

We all follow this “fishing” technique in multiple ways – talking about work, or seeing if there is an interest in travel or sport or even politics or reading or gardening or any other topics of conversation – without directly broaching the issue which might cause conflict or make someone feel awkward. I, for example, am careful about talking about travel with people I don’t know (and people I do know) … though not so much on my blogs! I’m conscious that there are people who would love to travel, but can’t because of financial issues, fear of flying, child or parental care issues, health issues, work issues, partners who refuse to travel, nervousness, those who can’t travel because they don’t want to travel alone, or those who just aren’t interested! And so I take my cues from others. Just as anyone, casting out small comments about an issue to see if anyone takes a bite, needs to watch for those bites or their absence. Their absence is just as informative as a confirmation. People who are fishing like this need to read* the room, as do the others in the conversation. We all need to be aware.

To state the obvious, in a conversation amongst adults who have just met each other, if someone does not respond to a comment or several separate comments about children, or responds referring to their niece(s) or nephew(s), there is probably a very good reason for it. If anyone is not volunteering information about their children or nonchildren, then they are clearly not wanting to bring up the issue in that group. At that point, a tactful conversation can easily and gently continue in other directions, without making anyone feel awkward. It doesn’t even have to go as far as making anyone feel very awkward.

I’ve heard it suggested that asking "the question" allows shy parents to join in on the conversation, when otherwise they might feel excluded. In my observations, however, parents don’t generally hang back from mentioning their children, unless they don’t want to, and it is common for parents (even shy ones) to say, “mine too” or offer some other anecdote about their children, simply to establish a mutuality of experience, show that they understand, or that they are part of the club too, or to invite other conversation about kids. It’s an issue of where is the most or least harm. Parents who are shy about joining a conversation are rarely going to feel as excluded as those of us without children when asked a pointed question.

But those of us who are childless or childfree are not the only ones who might bristle at being asked this question, or feel excluded in a conversation.

I’m sure there are many other reasons why some parents might not want to be invited into a conversation about their children.

It’s a question, then, that people ask from a place of privilege. Not just the privilege of being parents, but of being parents who are happy to talk about their kids, to share with others the fun stories, or the details of where they go to school, or play sports, or how well they’re doing at university or in their chosen careers. I really wish parents would think about that. After all, they might be more compassionate to their fellow parents than they are to the No Kidding!

Of course, having said that, I do have to acknowledge that parents might be so busy parenting that there is little else that they think about, or even have the capacity to think about. When parenting is so all-encompassing, they may feel uncomfortable in discussions about other issues - they don't have time or energy to travel, or read the latest news or listen to music or watch the latest Netflix shows or see plays or play sports or eat out. Maybe they don't work, or work is just a means to an end. I understand that. And I could talk about that with them, or even about what they wished they had time to do/see/read etc. It's not as if I am totally against discussions about children. Of course, although I'm especially interested in my friends' children, I'm happy to hear about other people's kids. But not to the exclusion of all else.

So my point is that it should never be a one-sided conversation, ignoring those who can't or who are uncomfortable participating. Conversations should be an exploration of experiences, views, commonalities, information. They should invite people in rather than leave people out.  Some questions don't do that. "Do you have children?" might be one of them.

* Yes, I know, I’m in danger of mixing metaphors, and I hope this is not too obscure for my English as a Second Language readers. 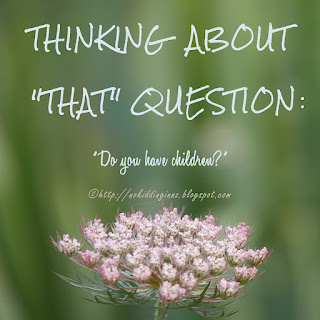 Email ThisBlogThis!Share to TwitterShare to FacebookShare to Pinterest
Labels: do you have children?, isolation, parents, perspective, questions, stereotypes