My Story: Repost and an Update

"I didn't always want children.  I know that’s not a typical confession to hear from someone who has dealt with infertility, but I married young, and resisted and resented the almost immediate pressure I felt to have children.  I was in a new exciting world where women had a choice, and I was insulted by the inference that my biology would decide my place in the world, not my own thoughts, decisions, and talents.  My husband was a little more traditional, but he also knew who he had married, and knew I could only have children when I was ready.  So I spent many years brushing off the unwanted questions about when we were going to have children, building up the persona of the career woman who wasn’t interested in having children.

It wasn't just about the career though.  I thought it was important to have children when I was ready, and not before.  I wanted to be a mother that was fully present for her children, not resentful of her stolen youth.  I also wanted to feel the maternal urge, and so I waited.  At times I wasn’t sure if it was going to arrive, but it ambled up to me in my mid-30s.  By the time I first conceived, I was in its full grip.  Whether it was simply biology (hormones and that ticking clock), my own natural wishes at the right time, or peer pressure, I don’t know and will never know.  But I know I genuinely wanted to be a mother.

Of course, as is obvious now, it is not that easy.  A long story short is that two ectopic pregnancies and two failed IVFs later, I knew I would never have children.  I got the news on my 41st birthday.  I've had better birthdays.

Coming to terms with the news was not easy.  In retrospect, the persona I’d built up in the early years of my marriage – that I didn’t want children – protected me as I dealt with the realisation that I would never be a mother.  But still, it was hard.  At first, the truth of my situation hit more and more deeply.  Each time I thought “when I have a baby” or “my children will ...” the pain hit anew.  I wouldn't be having a baby.  My children would never ...  And this got worse before it got better, like punching a bruise that is already tender.

But it did get better.  Gradually I realised that punching the bruise was pointless, and so my brain trained itself not to think about the babies I didn't have, would never have.  My brain stopped me thinking of myself as a mother.  This took time.  But the good minutes, then hours, then days, then weeks, came more frequently.  At times I fought against it, feeling guilty that – on the good days - I was not grieving enough.  I wondered, if I didn't continue to grieve and mourn the life I thought I would have, then maybe that meant I didn't really ever want it, or if it meant I was upset simply because I didn't get what I thought I wanted.  So I wondered if my pain was fake, wondering if I didn't really have permission to feel pain, if it meant I in fact deserved what had happened.  Of course, now I look back and know my grief and pain was legitimate.  But still, the process of recovery itself made me feel guilty.

But healing is a gradual process, and so gradually I realised that this endless sadness would not serve me well.  Back in the early days, immediately after my ectopic losses, I had felt the power of joy, even with something as simple as a joke on a sit-com, or the warmth of the sun on my back, a favourite song, or sitting looking out at the sea and a blue sky.  Grasping joy as it came, even when it was fleeting, was what healed me.

I realised too that feeling happy was not a betrayal, either of my lost babies, or of mine and my husband’s dreams.  Feeling happy with my life did not mean I didn't want children enough, or that I didn't grieve enough.  In fact, I felt strongly that I needed to be happy, to live well, in order to honour my losses, my pain.  I still do.  And so I guess I made the choice to be happy.

I didn't come to this insight overnight.  It took time.  I read books written by those who had gone before me, and – on an internet forum I frequented and that had saved my soul in my darkest days of loss – I in turn shared my experiences with those who came after me.  Helping them, responding to their raw grief, even whilst I was still healing myself, showed me how far I had come, and gave me insight into my own healing.  Learning to find happiness, and value, out of what I had been through seemed to make sense of my loss.  And so, over several years, I was able to let go of the guilt.

And letting go of that guilt opened up the world to me.  I was able to take joy in the aspects of my life that wouldn't be possible if I had children. I was able to read, and believe, research that promised that those of us without children would be able to have a happy life, and a happier old age.  I realised that I may not have got what I wanted, but that’s not always a bad thing.  I learned the secret of happiness is not to have what you want, but to want what you have.

I am happy.  I have a good life.  No, a great life!  I’m currently still basking in the memories of six weeks in Turkey and Europe – I couldn't have done that with kids. I'm so much more in touch with myself now, my emotions, my talents and yes, even my flaws. Maybe especially my flaws. I suspect age has something to do with that.  But I also think that my infertility and loss has tempered me, forged me into who I am today, someone who is wiser, kinder, more compassionate, more realistic, and yet more optimistic too; someone who is contented, happy.  Someone I like."

That was my story nine years ago almost exactly. Fbk keeps reminding me that this time in 2011, I was staying in a cave hotel in Cappadoccia/Kapadokya. It was a fabulous trip, with a lot of firsts - four new countries, ballooning, a cruise. We were gloriously childfree on that trip, and since then I've been fortunate to take a few more wonderful trips, both internationally and in New Zealand, that I wouldn't have taken with children. Life has indeed been good.

Looking back at when I was first learning to accept I would live my life without children, I had this fantasy that I would buy a bright red convertible, the opposite of the big child-ferrying buses some of my friends drove, just because I could. But work and travel and reality took over. Plus a number of factors, including a) I like to be anonymous, b) I live in a city that is not known for its large number of "top-down" days, and c) I have a family history of skin cancer and like to limit my sun exposure, meant that I was never really going to get a convertible! Actually, I'm fine with that, because the idea of the red convertible symbolised the freedom that I felt at the time, the travelling I was able to do, the choices I was able to make.

But life doesn't always allow us to make the most of that freedom. Life changes. It intervenes in plans and dreams - lost jobs and a tough job market and major house maintenance expenses, a hysterectomy and broken ankle and trigeminal neuralgia, care of elderly relatives and the death of my mother and my mother-in-law, and this week, probably my father-in-law. Even a pandemic! None of these troubles are unique to me, or - mostly - to my childless situation. They're just life. Sure, life without kids has its issues. But I'm aware of those. After so many years, I'm used to them. I don't like them all, but I'm used to them. They're part of me, and make me who I am. They've taught me so much about myself. They've taught me that I'll get through the tough parts of life, and they've taught me to appreciate life's joys. A lot of people never learn that.

If this is an honest update, I have to say that I'm probably less contented and happy than I was seven years ago. As I've mentioned, life hasn't always been easy the last nine years. And this year is 2020! So all things considered, I'm doing fine. After all, the whole world is struggling. But being childless? I'm not struggling with that. It's part of me - the good and the bad. And you know? That's okay too. 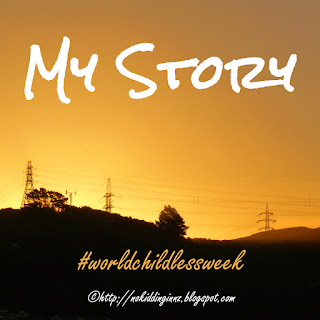 Email ThisBlogThis!Share to TwitterShare to FacebookShare to Pinterest
Labels: #worldchildlessweek, knowing myself, self-acceptance