The next big thing

These thoughts, or a variation, are common in those of us who come to face life without children. They are what I will call the first, transitional thoughts. It’s what we think when we are closing in on a final diagnosis or decision, it’s what we dread when we are in the midst of infertility, and it’s the view of the No Kidding door from Infertility's Waiting Room, and those first steps through it. So many of us really can’t see any joy in the life that is ahead of us. Maybe we don’t want to, because we’re still grieving, and feel that looking forward would be a betrayal of ourselves, and our losses.


But of course, time passes, and we walk through the door, and eventually into the light. Because there’s no other choice. Because human nature says that we adjust to our realities. Even if we don’t believe we’re going to get past this phase, we do.

The second line of thought  looks for the next big thing. “Well …” we say, wiping our hands of our lost dreams of parenthood, “what’s next?” I have seen this in many people. They feel that if they’re not going to make their mark on the world by producing children, then they need to do something else. Something big. Or that they have a big hole in their lives, and they need to fill it with something important.

I have thought this myself. I wanted to do something big, something different. I felt that our future was a blank slate, and that we should actively choose what we write on it. Part of this was fear. Fear that life as it had been would be too miserable without children. Fear that those initial, transitional thoughts would be proved right. I wanted to escape. Escape for me meant skipping the country, and going somewhere far far away. I looked at international language programmes, and imagined going somewhere where no-one knew me, and my non-parent state would be irrelevant. I was keen to plan a different life with my husband. I didn't know what we would do.  I just wanted to do something different, somewhere else.

You see, I think I thought I could escape the grief, escape the fear, escape the hard work of healing that I was going through. But if there's one thing I know now, is that all of that will come with you, wherever you are. I knew though, that I couldn't force my husband to do something he wasn't ready to do. I'd begged him to move to Bangkok in the early 1990s, and I couldn't do it again. Anything we would do needed to be a joint decision.

As it turned out, in that first year or two after my diagnosis, my husband had a new job, and I took on a new role as the Chair of the Board of Directors of a state company. Though I would have dropped the role like a hot potato if my husband had said, "let's move to <insert exotic location here> and let's go tomorrow." I got work as an independent consultant, and in due course I found enormous satisfaction from working as a volunteer online. I got my fix of travelling by trips to places I'd always wanted to visit, and managed to meet some of my closest online friends. It was a compromise, undoubtedly, but it worked for both of us. I'm sure my life looked as if it hadn't changed since before we'd tried to have children. But it wasn't the same. It felt different. Initially, as I was grieving, it was of course worse; but eventually, it felt better. Much better. The difference, I think, was in my attitude, my approach to life, my acceptance and understanding. Maybe that was wisdom that comes with age, or maybe it was wisdom that comes after infertility.

The interesting thing I find is that this is not necessarily the easy option. We might have to fight that yearning for the next big thing, and justify our lifestyle to ourselves. Or, we may have to justify our lifestyles to others. I’ve often heard bloggers and others complain that people think they should be doing something big, or travelling the world, or going out every night to the latest restaurants or clubs, or driving that red convertible or skydiving, to take advantage of that no kids lifestyle. They feel pressured to be doing more, to be doing something bigger or better. But why? Living a fulfilling, normal life – isn’t that enough? It should be.

Sure, maybe we are able to do things we wouldn't have done if we'd had children. My husband and I have travelled a lot, and we love that. But that was always going to be our thing, children or not. It's simply been easier without children. I wanted to be dramatic, and get a bright red convertible (convertibles are extremely uncommon in New Zealand), something that I absolutely couldn't have done with children. But you know what? I still don't have a bright red convertible. And frankly, I don't want one any more. I've never been skydiving either. (And I never will!) I'd still love to live overseas for a few years (I've always wanted to do it again), but no longer need to do it as an escape. Sadly, in recent years, elderly parents have made that impossible too. So I haven't found my next big thing, but I've found lots of satisfaction doing a lot of next small things. I believe that part of the fun of life is looking for that next big thing. For me it's the fun of the chase; the journey is more important than the goal.

If we find our next big thing that is great. But there doesn’t have to be a next big thing to replace having children. Life will fill up that hole, often to overflowing, with love and fun and new experiences and knowledge and people. Eventually, for me at least, it brought a sense of deep contentment. We don't have that gaping wound for the rest of our lives, we have rich, satisfying lives. Even if at first we couldn't have begun to contemplate that this would be possible, let alone achievable. 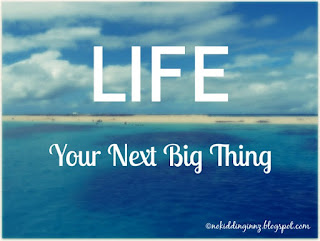 Update: See the next post for one last thought on this.
Posted by Mali at 08:30

Email ThisBlogThis!Share to TwitterShare to FacebookShare to Pinterest
Labels: acceptance, gifts of infertility, it gets easier, knowing myself, next big thing